About five weeks after the Dwarf Honey Bee (Apis andreniformi) absconded, a new colony was seen developing near the old abandoned colony in the same Golden Penda tree (Xanthostemon chrysanthus). The new colony (below) is about 2 metres high, slightly lower than the old colony (above).

The Bush Grape (Cayratia mollissima) covering my fence next to the tree has been flowering profusely all the time LINK. Swarms of Dwarf Honey Bees were seen daily, collecting nectar from the flowers – see video below.

We will be monitoring this second colony to see whether it will develop to its full potential. Or whether the Wax Moths will attack the colony again. Or the Honey Buzzard (Pernis ptilorhyncus) will raid the colony for its honeycomb, as in the case of a nearby colony some months back LINK. 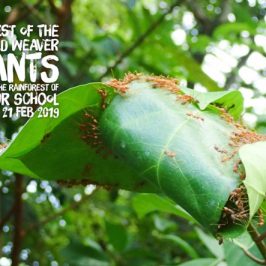 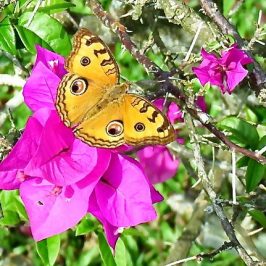 “Although Bougainvillea bushes are so widespread all around Singapore, few of us actually pay close...