I was turning my compost heap this morning when I came across the larvae of the Coconut Rhinoceros Beetle (Oryctes rhinoceros). I placed them in a container, planning to observe their development (below). It was then that the resident Javan Myna (Acridotheres javanicus) pair made its presence known when the attending juvenile started begging loudly.

They were obviously after the compost fauna that I exposed. The most obvious of these are the Coconut Rhinoceros Beetle larvae. These larvae are usually buried deep inside the rotting compost and seldom encountered by birds. Only when the larvae complete their life cycles will they emerge as beetles.

I got 8 of the smallest larvae, placed them on a shallow layer of compost and left my video-cam on (see above). As soon as I left the scene, the mynas flew in and seek out the larvae. They used their mandibles, opening them in the soil to expose the larvae (see above and video at 00:15; 1:00 and 1:54). The latter were then picked up, beaten into submission before swallowing. The adults also fed the begging juvenile that generally stood waiting to be fed (above). Only once did I see the juvenile looking for a larva but without success.

“I have been observing this pair of mother and chick Sunda Pygmy Woodpeckers (Dendrocopos moluccensis)... 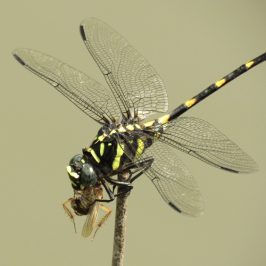