“This Eurasian or Common Cuckoo (Cuculus canorus canorus) was encountered and heard more often than seen. It was surreal (despite knowing it) to hear the bird call out with the classical ‘cuckoo-clock cuckoo’ calls of ‘cuck-oo’ or ‘cu-coo’. After hearing it a few times you can hear it in your sleep and even on return home.

“On two occasions we saw birds being chased by Stejneger’s or Eastern Stonechats (Saxicola maurus stejnegeri), presumably due to parasitism.

“The bird above and below are both males. Only males are said to make the ‘cuck-oo’ calls and that is one means of identifying them. In addition, females in grey morph are said to have some ‘buffish wash on the upper breast’.

“A recording of the calls can be heard HERE

“A sonogram and waveform are given below.” 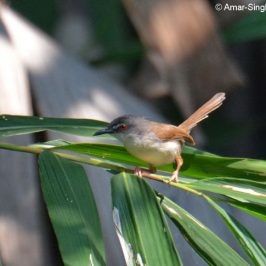