“When these shy White-browed Crake (Porzana cinerea) offer opportunities, I am grateful to receive them. The 4 of the 6 birds were very accommodating. I had extended observations, including many preening episodes.

“A video of 3 separate birds preening is here:

“Note that there are odd oral movements as part of the preening – see the first one third of the video…. They were very reminiscent of the snipe I posted much earlier that demonstrated rhynchokinesis – see HERE, except here there is no apparent flexing of the upper mandible.

“I have seen this hyper-extension of the oral cavity with some wetland birds as part of preening behaviour. I wonder if it serves the same function as stretching the leg and wings out (below)? Hans Peeters of California, USA responded: “… I have seen beak-snapping, accompanied by variable head jerks, in many other birds. In raptors it is commonly observed during (or just after) feeding, with the apparent function of aiding the passage of food or other material down the GI tract, or, alternately, to eject an item or pellet of indigestible material taken in with food. Notice that in your video, the rail seems to make a brief attempt (involving shaking of the head) to regurgitate something that has perhaps lodged in the esophagus or the proventriculus. Head scratching serves not only as an attempt to remove parasites but also to get rid of dirt, molted feathers and what have you.” Amar agreed “…that ‘beak-snapping, accompanied by variable head jerks’ are part of aiding food down the oesophagus in many birds (above). [But] This chap has been foraging but had stopped for quite some time. First to have a bath (image attached but poor view, see below). Then walked up to a dry spot on the dead branches to have a long preen. During which the mandible movements were observed. “So I am inclined to think they are part of preening.
Just like the snipe I posted (and you kindly comment on) – there was no reason for the beak movements except to ‘exercise’ the mandibles?” 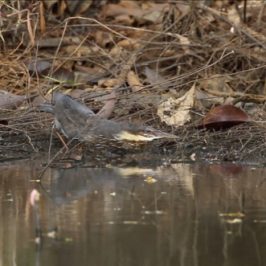 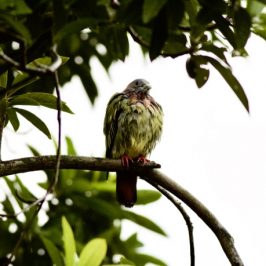