I made an earlier post of a male Olive-backed Sunbird (Nectarinia jugularis) sipping nectar from flowers of Wild Banana (Musa ornata). Unfortunately the view was not the best. I was unable to fully document the activities of the sunbird. A subsequent video documentation reveals what actually happened (video below). A male and a female Olive-backed Sunbirds, instead of probing the flowers from above and in the process help transfer pollen from one flower to another, took short cuts. They pierced the base of the flowers with their sharp bill to get access at the nectar.

Another video taken closer to the banana inflorescence (below) shows the older flowers dotted with scars of earlier piercings. The male sunbird instead of piercing the flowers, made use of the older openings to access the nectar at the base of the flowers. The openings also allow ants to get directly at the nectar.

Grey-breasted Spiderhunter (Arachnothera modesta modesta), with its much longer bill, has no problem obtaining nectar from the Wild Banana from the top of the flowers. Obviously spiderhunters are much efficient pollinators that sunbirds, as shown HERE. 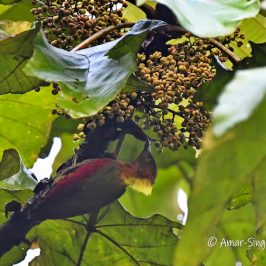 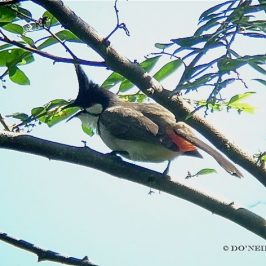 “One of my favourite strangling fig trees bore fruits after the rains came. I was... 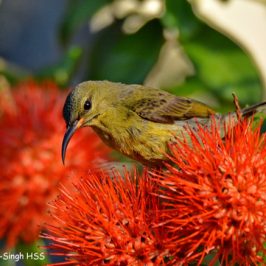