“On the 21st April 2016, a mature Clouded Monitor (Varanus nebulosus) made its commanding presence felt as it dominated over a generous bed of leaf litter, furiously flicking out its forked tongue (below).

“This lizard had only one thing on its mind – food. Oblivious to the attention it was receiving, it was focused on finding earthworms, insects and other tasty snacks. The foraging process includes:

– Sniffing (below):
Using its sensitive tongue and nostrils, the lizard takes a nose-dive to detect its prey.

– Scratching (below):
Using its impressive set of claws, it rakes away the dead leaves and topsoil to expose any invertebrates hiding underneath.

“As soon as a prey is found, it is swiftly snapped up and gulped down.

“Occasionally, clouded monitors may also use their stout snouts to shovel away loose earth or pry apart root tangle to plough deeper into the topsoil, in search of other invertebrate prey.

“Video clips of this foraging activity may be previewed here:” 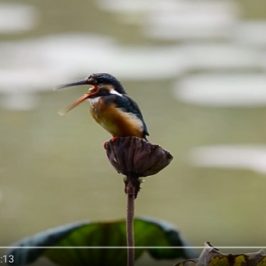