Judy Quah lives on the 9th floor of a highrise apartment building in Singapore. She maintains a collection of plants along her balcony (above left) and this in turn attracted a pair of Olive-backed Sunbird (Cinnyris jugularis) that came to harvest nectar from her devil’s backbone (Pedilanthus tithymaloides) plant (above centre). On 19th January 2009, the pair built a nest attached to her potted passion fruit (Passiflora sp.). The female returned to the nest a few times a day and roosted in it every evening (above right). She had probably laid an egg or two and was incubating them.

On 31st January one egg hatched out of a clutch of two (left). The second egg hatched the next day. The male was only seen then, having disappeared for the last two days. Two days later the younger chick was found dead below the nest, probably pushed out by the older sibling. So only one chick fledged.

On 26th February, slightly more than a month later, there was another nesting. The bird or birds made repairs to the old nest and the female returned in the evening to roost. Four days later (2nd March) there were two eggs in the nest. One hatched after 12 days and the second a day later. Unlike in the first nesting where only one chick fledged, both chicks fledged, a male and a female.

A third nesting was seen on 31st January 2010. This time a new nest was built from scratch as the original passion plant had to be destroyed because of disease. This time the nest was attached to the devil’s backbone plant (below left). Note that the chicks are naked and blind (below centre and right). Both fledged and as with the second nesting, one was male and the other female. The male chick had a darker throat-breast and was more active than the female in the nest. The slightest noise saw the female chick retreating while the male would pop its head through the entrance.

A fourth nesting was seen on 3rd April 2010. The birds reused the old nest, as it was not too worn out. Again only the female incubated the eggs and brooded the chicks (below left). The male visited her regularly to feed and to keep watch, as well as to leave with the female to feed. The female would always return around 1830 hours to be in the nest. On 3rd April there were two eggs in the nest, although there were none the day before. When the chicks hatched, both adults brought food. There were also two smaller juveniles, recognised by their distinct chirping. Cooperative breeding? This has been reported in a few species and Cheke & Mann (2008) believe that “…it may prove to be commonplace.” As in the case of the first nesting, the younger chick was thrown out from its nest. Judy replaced it back into the nest but the next day it was pushed out again. So only one chick fledged, on 28th April (above centre and right)

Note: It is not established whether the four nesting were by the same pair or different pairs.

All images by Judy Quah. 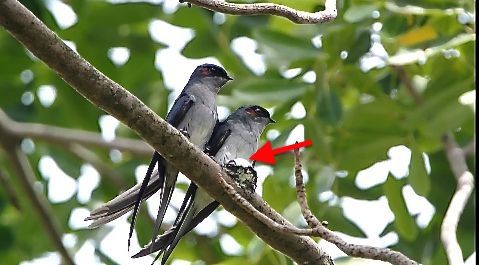