Kennie Pan photographed a Stork-billed Kingfisher (Halcyon capensis) manipulating a talapia it caught earlier before swallowing it (above left). In the course of bashing the struggling fish, something stringy trailed out from its mid-section (above right).

According to Marcus Ng, “the fish is a tilapia cichlid, a naturalised alien. The ‘string’ doesn’t seem like a fishing line though. My guess is that the bird, perhaps while violently shaking or smacking the fish to kill it, squeezed some organ that ruptured and caused the contents or viscera to be ejected from a wound or the anus of the fish.”

Dr Khoo Hong Woo has this to add, referring to the possibility of the fish’s innards coming out from its anus: “Yes, that may be so since the first photo didn’t show any ‘stringy’ stuff to indicate its a fishing line. Tilapias are herbivorous and they have very long tubular intestines and their ‘shit’ comes out stringy and encased in a mucous tube. But there are several ‘plys’ so it could be the intestine being forced out. Too bad the photo showed it coming out of its gill space.” 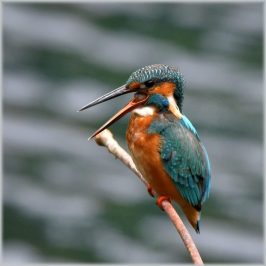