Raising Kings is a sequential to Breeding Kings.

Join me in this 2nd part to witness Hector and Zena – the parental pair of White-throated Kingfishers (Halcyon smyrnensis), nurture their brood and let go. Maybe human beings may find a jewel or two in this documentation to admire our feathered descendants of mythological King Ceyx, enjoy the headaches and heartaches of bringing up children and learning the art of detachment.

Allegro – the oldest fledgling, endowed with downy feathered head, remained naively unperturbed by a harsh world around him (below left). Together with the rest of his siblings, he remained cutely and stoically perched on a horizontal branch across the small river on fledgling day. Occasionally, some were seen looking up at flying objects. It soon dawned on them, they too were expected to do the same. Survivor skills were conducted by Hector on the 3rd morning (above right). Dad with shiny reddish-orange beak to match his feet gave a demonstration of one smart plunging glide along the water’s surface. He skimmed out a little fish, perched and swallowed the staple food whole.

Hector gave a serious, fatherly stare at Allegro as if to say, “Look son, this is how our ancestors first lived by our name-King of fishers and you gonna learn fast to live up by that name too.”

The fledglings gawked in disbelief. Nervous Piccolo nearly fell from his perch as he observed in dismay.

“Oh my goodness! Is this what I have to do? Oh no…!” exclaimed Piccolo.

Mother Nature had no mercy. In toughing up the fledglings, she sent two continuous nights of heavy rainfall. I was concerned and wondered how they fared under such circumstances.

I consoled myself and recalled an observation that, immediately after fledgling, they instinctively undertook to a preening ritual to waterproof themselves by stimulating their uropygial gland to secrete an oily fluid.

By late afternoon, the fledglings were found roosting on low perch under a fallen Poinciana tree canopy about 30 feet away. It became a favourite roosting spot for the fledgling trio-Allegro, Modesto and Piccolo (below left). Predators oblivion to the chicks, were plentiful and a favourite breeding spot for lurking monitor lizards (above middle). Even a stray cat looked alert and well fed (above right).

The chicks have weathered the storm. The 4th day saw progressive growth and transformation of the fledglings. Yellow feet were beginning to show splashes of grey above and bright, yellow tipped bills receding into grey tones (below). Growth provided more strength to their wings, flight of fledglings became more confident. Coaxed by parents, they began a flight of sixty feet further up stream, onto a feeding stage. On this wired line, the feeding stage provided many interesting moments of observations. Parents roll called each dawn break with a descending, pre-breakfast wailing and rolling of ‘keeee… keee…’ sending chicks in for a head count.

I soon began to recognise the differences between mating calls, alarm calls and feeding calls.

Hector & Zena with a fledgling posed to show their differences for comparison (left top). Zena, the female parent appeared to be of slimmer built while Hector certainly looked macho and more rounded on the head.

The role of chick feeding was purely carried out by Zena. Hector supervised and kept a little distance away but never failed to fill in where needed. River snails were favourites. Zena would carry out a series of dives and whacked off shells against a branch during initial stages of feeding. She ensured each of her brood received sufficient rations (left below). It was observed as from the 6th day, chicks were able to swallow river snails whole. Lizards, dragon flies were also added for diet variety to their daily 8am breakfast (above).

Breakfast was a busy time and the following opportunity images provided much food for though t- “A family that eats together, stays together (above, below)” On this feeding line, the chicks were taught discipline, teamwork, sharpening predatory instincts, sharing, independence and most of all, survival skills. They had to learn to catch on the fly and fish for their meals. It was indeed crash course to be taken seriously or starve. One of the images showed a pair of Eurasian Tree Sparrows Passer Montanus perched on the same line (left). The kingfishers learnt to share space and live in peaceful co-existence. To be continued… 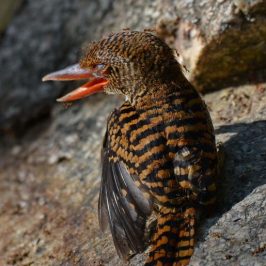 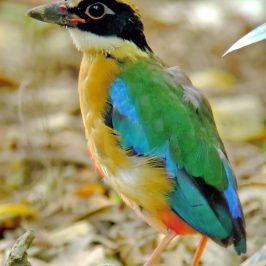