The two chicks of the Malayan Whistling Thrush (Myophonus robinsoni) finally fledged on the early morning of 1st April 2008.

At 0701 hours, an adult thrush approached the nest, landing on the wooden beam. The two chick were highly excited, chirping and flapping their wings, their bills agape. As the adult walked nearer to the nest, the chicks responded by moving towards it, in a “flying” sort of way (below, left to right). The adult seemed to offer the food to one of the chicks but apparently not delivering. Did the adult swallow the food? And at that split moment the adult flew off downwards to be followed immediately by the two chicks (above, left to right). It was too fast for the video to catch the flight.

After so many days of trying every now and then to entice the chicks to leave the nest, the actual moment of fledging seemed an anticlimax. The nest remained empty for a few minutes before an adult appeared with food. This adult could possibly be the mate of the earlier bird, as it was obviously unaware of what had happened. It perched on the beam, looked around, then entered the nest before flying off with the food (above). There was a subsequent appearance of an adult at the nest, this time without any food in its bill. It perched on the beam supporting the nest, entered the nest to examine it and returned to the beam. In all, it remained for more than 20 minutes, preening and stretching its wings before flying off (above).

The nest was empty throughout the day and has remained empty since.

PS: Allan Teo’s people at Cameron Highlands informed that when the two chicks left the nest in the morning, they landed on the ground below, hopping about. Apparently they had still to master flight. The two adults were around to keep an eye on them and, no doubt, encourage them to fly. Should the nest be in the forest, their first flight would have landed them on some branch or other lower down. Unfortunately in the warehouse, there are no structures where they could land and so ended on the ground. To keep the fledglings safe from the many wandering dogs, they were put in a box and left outside the warehouse. The adults kept on feeding them until they flew off soon after.

On 4th April, three days after fledging, the two juveniles were flying around, still dependent on the adults for food.

You can view the video of the fledgling moment downloaded by Allan HERE.

The series has now been published as: Teo, Allan & Y. C. Wee, 2009. Observations at a nest of Malayan Whistling Thrush Myophonus robinsoni in the Cameron Highlands, Malaysia. BirdingASIA 11: 95-97. 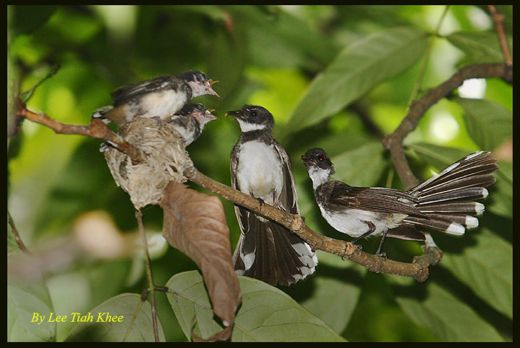 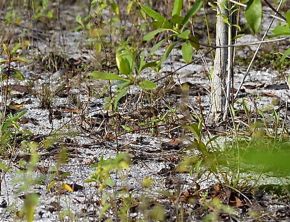 February must be the beginning of a new breeding season. In and around my garden,...