When “Tale of the Stock-billed Kingfisher” was written in 2006, describing the mythological story of how kingfishers’ family of Halcyon derived their names from; how a Stork-billed Kingfisher (Halcyon capensis) swallowed a huge fish bigger than the bird’s head, I did not expect to bump into their cousin’s nesting grounds and write about it so soon in my love affair with birds.

The White-throated Kingfisher (H. smyrnensis) is just about the most frequently seen and photographed species of kingfishers in Peninsular Malaysia (left). Yet, these very intelligent species have made their nesting grounds inconspicuous, breeding their young so discreetly that few birders have the opportunity and good fortune to discover, to observe and to document them.

The first day of 2008 could not have been a better start when a breeding female spooked me, as she flew out from a hole just after 8am, to stretch her wings and to feed. Equally taken aback, she applied her emergency air-brakes, changed direction and flew off in aghast. The female has blown her cover – her secret nesting cavity on the side of a river bund (right).

The incident set the precedence and confirmation of my earlier suspicion what those cavities were. Rat burrows, lizards’ haven probably but I was not to assume them to be belonging to kingfishers until seen to be believed.

Taking my pooch (on leash) for regular, short drives and walks in the mornings and evenings, provided quality time spent with a pet. Having an obedient trained canine bodyguard provided the bonus. Her disciplined temperament gave me the opportunity to observe male and female breeding behaviours of White-Throated Kingfishers over regular periods of time to justify the need to document my observations.

The Alpha male’s role was purely of sentry duties, always perching within eye-shot of the nesting site. The female spent most of her time incubating, protecting her eggs from approaching rodents and remained in burrowed cavity when night falls.

For two weeks into the month, I took casual walks around the area and made no effort to remain longer than necessary to attract the attention of passer-bys or alerted the sentry’s suspicion of my interest in his family’s assets.

On 17th January evening, female parent was first seen with grub. She flew into her nesting site confirming hatching of eggs. Photographing to document this first part article series was kept to the minimum. It was carried out discreetly and hastily from a distance without stressing parents or inconsiderately making my presence felt. The waiting of long periods for any thrill opportunity shots of chick feeding was not practiced.

I informed no one of the location of my findings. WHY? Am I being selfish?

It is human’s nature to be curious. Want to know what I was looking at with my binoculars, where is the nesting site, how MANY EGGS there are in the nest and “I WANT TO SEE! I WANT TO SEE!” syndrome etc….

Generally amongst birding circles of pals, if bird species is known to be quite rare or rare, hordes of birders and photographers having received wind of information, would descend onto the site to observe and to photograph these lifers (a birding term to mean first encounter with the species) to add to their checklist or gallery of computerized bird images. There are also the over zealous minority that would baby-sit, park themselves and gawk for hours at nesting sites.

Such overly presence of humans, unintentionally attract predators like monkeys, stray cats/dogs and ignorant children to eggs or nestlings.

The presence of careless or new excitable and or inexperienced bird observers/ photographers overstaying their period of observations unfortunately, do compromise incubation periods and feeding of hungry chicks, resulting in high probability of either parents abandoning their nests completely or chicks die from hunger.

When this happens, other rodents like centipedes, ants and maggots become undertakers/scavengers to their carcasses. Diehards and those who never learn from their mistakes are quick to blame these creepy crawlies and the four legers for chick deaths or their disappearances.

It is for this reason that I made myself a personal pledge, as an amateur bird- digiscoper, not to reveal active nesting sites however common the species may be to anyone. I also keep a cardinal rule for not posting out any nesting images before chicks fledged (fly off) in the name of preservation and conservation of bird species.

The welfare of birds comes first, not my birding articles or showing the prowess of action or creative photography shots. (I must also add that methods and scientific studies of specific rare birds/surveys carried out on field assignments by researchers differ completely, for which I am not qualified to elaborate). My favourite readers, you will appreciate better to enjoy an arm chair ride with me and visualise, as I journey you to the site in writing to witness Hector and Zena – a pair of very experienced White-throated Kingfishers breed and bring up their young.

My observation of nesting barbets, I thought their vigilance was thorough enough with their 3-step approach, but this pair impressed me with their vigilante skills and patience beyond doubt.

Visualise yourself at a river bund with Poinciana and Albizia trees abound. A handsome male White-throated Kingfisher with chestnut-headed plumage, wearing what looked like a large, white frontal bib perched on a branch, giving out loud ‘all clear’ signal calls sounding a descending staccato like – ‘quick quick, quick!’.

Zena, his mate flew in and perched on the same Poinciana branch as Hector (left top). In her beak, a huge, lifeless lizard lay sandwiched and waiting to be breakfast fed to the chicks (left bottom).

Met with approval by Hector, Zena double checked that no one was looking took a quick swoop and disappeared into the cavity. I expected she would take some time to feed such a big catch to 2-3 day old chicks. I hid behind a tree out of their view, no less than 10 metres away but she surprised me by flying out in less than 1min.

“Chicks eating on their own already?”

There had been times I was spotted first by the sentry upon my arrival. He squawked alarm bells keeping Zena at bay. If I got spotted by Zena, who appeared to be the only chick-feeding parent, would wait it out patiently until I hurried out and disappeared in defeat. There was once, she decoyed me by swallowing her catch and flew off in opposite direction to her nest! I felt so guilty. Chick feeding began after dawn and peaked between 8-9am. Lizards and river snails appeared to be their favourite diet (above). Evening feeds don’t stop until dusk. 20th January saw discarded shells and regurgitated pellets at the entrance of the nesting cavity (right). There were also white streaks of bird droppings running down the side wall. Obviously, Zena had good housekeeping skills. One can only imagine – the chicks’ capability of reversing their rear ends toward the cavity entrance and pooped discreetly.

This image reminded me of a China’s visit to their public latrines in the mid-nineties. Do the squat over a flowing drainage system, see the contents of your bladder and guts saying ‘goodbye’ and floating away from you!’ Lucky too, if one finds a half-door latrine at Xian, then.

31st January morning was a bit special. It was 0900hrs.There was an unusual air of calm and one of the parents was around – within view.

‘Why no feeding this morning?” I thought.

My attention was drawn to the ‘tok, tok’ calls of a pair of breeding Coppersmith Barbets (Megalaima haemacephala) about 10 metres away from the nesting site. I pursued the direction of the calls. What issued was a good 10mins of ‘orni-porny’ observation and digiscopy of an exuberant pair of the smallest species of barbets, a good 25metres away across the river, high up in the skeleton trees. That was gift of good manna from heaven for my next article write up.

When the show was over, I started walking back. A quick glance had my eyes glued on a kingfisher that was smaller than the usual. My scope said something else. At the receiving end of my 82 mm diameter field scope, a stoic looking White-Throated Kingfisher fledgling was seen perched on a low fallen branch across the river.

“Oh my goodness, the chick is out!”

The time was 0913 hrs. and my digital camera went, ‘click, click’ to capture my first shot of a fledgling male as he began extracting oil from his preening gland to preen himself (below left). I named him, ‘Allegro’- the fast learner.

I scanned harder. Behind some branches, perched half-hidden was another chick. Two chicks (above right)!

This chick turned out to be the smallest. I named it, ‘Piccolo’.

The parents had coaxed them out of their nesting site when I wasn’t looking. Instinctively the fledglings headed 12 o’clock towards a water source.

I missed the grand finale exit. Perhaps, it was the design of their Grecian Gods – protector of all kingfishers living by the waters edge that their births into the world are not designed to be witnessed by eyes of Homo sapiens.

On the way out, I thought it was odd that the perch of one fledgling seemed higher. It turned out to be the 3rd fledging named, ‘Modesto’. This chick seemed fascinated by the flight of an over towering Pond Heron (Ardeola bacchus) taking off, sending a confused Modesto clinging for life and swaying with the branch. The three fledglings appeared to be healthy as shown in the following image profiles (above). Their soft parts – being their beaks, eyes, featherless areas and feet and toes are worth looking at closely to compare their features with adult parents, as surprisingly they are not described in many bird guide books.

The beak is greyish black and yellow tipped to match with yellow feet and toes dashed with grey on the anterior aspect. Fledglings also have white eye rings with chest and breast splashed white and mottled. White supercillium (eyebrow) is also noted. At 0936am, 31st January ‘08, a record of the emptied nest cavity site was photographed with tissue wrapper for size comparison (left).

The diameter of the nesting cavity is… readers’ guess.

Do join me again for the 2nd part article to enjoy the promise of many images, showing how Hector and Zena, descendants of King Ceyx, raised their brood and LET them go. 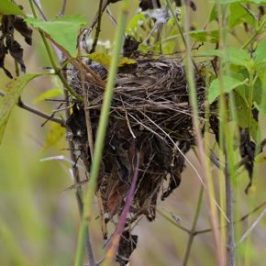 “The Yellow-vented Bulbul (Pycnonotus goiavier analis) has the capacity to build nests in a variety...