The video of a Sooty Oystercatcher (Haematopus fuliginosus) probing for marine worms in the mudflat during low tide was documented in Victor Harbor, South Australia in October 2016 (above).

Here, the oystercatcher moves about probing its sharp red bill into the exposed sand or mud at a rapid speed looking for polychaetes – segmented marine worms with numerous bristles by the side of each segment. At 0:11, 0:21, 0:23; 0:56… minutes of the video it can be seen that the oystercatcher succeeded in pulling out a polychaete.

Even with the incoming tide covering the ground, the oystercatchers continues with its probing (above, below).

Oystercatchers are so successful in such forages that they are known to capture prey faster than they can digest them. Thus, oystercatchers need to rest between foraging sessions to allow time for the digestive system to handle the food. 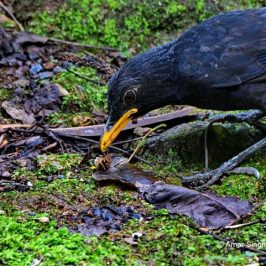