“I went back to this site at the fringe of the city that has some fruit and vegetable farming surrounded by secondary growth. The Malayan Mistletoe (Dendrophthae pentandra) was flowering extensively with fruit. Many sunbirds, flowerpeckers, some Blue-winged Leafbirds (Chloropsis cochinchinensis moluccensis), etc were feeding on it at this site.

“In the past I was I was surprised to find Blue-winged Leafbirds feeding at this site, as the nearest good jungle patch is about 3-4 km away. I have now accepted that there are resident at the site.

“On this occasion there were at least 4 Blue-winged Leafbirds – 1 adult male, 2 immature males and one immature female (I could have missed an adult female).

“There was no competitive feeding among the 4 birds suggesting a family group.

“The value of this observation relates to the brood size. There is no information on clutch or brood size in my region (Wells, 2007). However, Wells (2005) states “clutch two eggs, occasionally three in in norther outer tropics”. This possible family unit of 1 adult and 3 immature birds suggests the likelihood of a brood of 3 in the region. 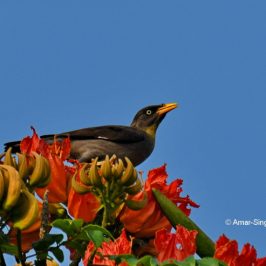