“I heard two types of ‘advertising calls’ from this male Little Bronze Cuckoo (Chalcites minutillus peninsularis) (above). The first is used very often, even while foraging and is the predominant call.

“Erritzøe, Mann, Brammer and Fuller. Cuckoos of the World, 2012 describes it as “chiw-chiw-chiw-chiw”. To my ear it is a weaker version of the Banded Bay Cuckoo (Cacomantis sonneratii) calls. Wells 1999 says, of males, that it is often uttered 3-5 times, usually 4 times and I can fully agree with this observation. I head this call numerous times in the 30 minute observation.

“An edited recording is in given above with a waveform and sonogram below. The call picks up between notes 1-3 and then seems to ‘falter’ on the 4th note. “The second call is used very much less commonly and I only heard it 3 times. It is as Wells describes it ‘a thin, high-pitched, drawn-out trill’. To my ear it sounded like a weak or soft Storkbill Kingfisher call. I sadly have no recordings. 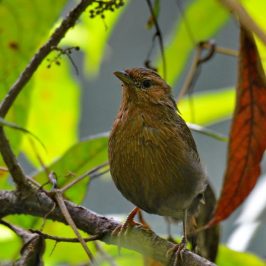 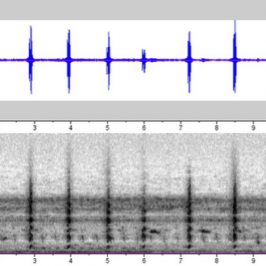 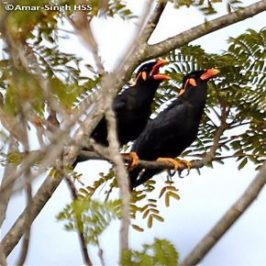