My MacArthur Palm (Ptychosperma macarthurii) is fruiting again. I only noticed it during the late evening of 5th March 2018. The palm was bearing long bunches of ripening yellow and orange fruits (below). These two birds fed separately as the arrival of the bigger green-pigeon would invariably cause the smaller bulbul fly off. The bulbul flew in, pluck off one fruit and immediately flew off, to swallow the fruit elsewhere. It then came for another fruit, On the other hand, the Pink-necked Green-pigeon, in this case a male, took its time moving around the bunches of fruits, picking the ripest. The fully ripe fruits got detached as soon as the bird’s mandibles clamped on it. Those fruits that have yet to fully ripen resisted the pull, in which case the green-pigeon would choose another. Once plucked, the fruit was immediately swallowed. Up to 13 fruits were taken before bird flies off.

On the second day, more than half the fruits were gone, eaten by birds or shaken off the tree by the movements of birds through the fruiting branches.

A new player was the Asian Glossy Starling (Aplonis panayensis), also swallowing the fruits. When it flew to the palm, a juvenile bulbul that was there immediately flew off. Then came a male green-pigeon. Surprisingly both green-pigeon and the starling fed peacefully together (video below).

The video below captured a Yellow-vented Bulbul taking its time to lick the ripest fruits, swallowing them whole. It was not disturbed by any other birds and so took its time. The other segment of the video shows a juvenile Asian Glossy Starling, also swallowing the fruit but still learning as quite a few fruits slipped its mandibles to land at the base of the palm.

I collected 100 fruits from the ground. Their total weight was 100 grams or on average, each fruit weigh a gram.

These fruits are not too large as compared to other palms. The seeds are similarly smaller, as can be seen HERE. So I suppose the green-pigeon can easily store them in its crop and regurgitate the seeds later. 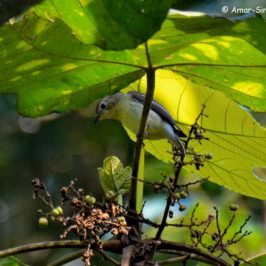