“Airline pilots avoid head-on collision in mid-air with the help of several human interventions such as intensive pilot training, on-board automated avoidance warning equipment that detect and instruct the pilots what to do in an emergency situation, assistance from control towers and also their own instinct and vision. However, with only their own natural instincts and senses, how do two powerful eagles hunting for the same prey, avoid a head-on collision?

“An extremely alert avian photographer, Mr Dick Tan took a series of 5 interesting photos that showed how two White-bellied Sea Eagles (Haliaeetus leucogaster) avoided a head-on collision while hunting for prey at Potong Pasir on April 2018. It is helpful to take note of the dark line in the background where the water meets the grass. It will be used as a reference horizon line to detect which eagle is up or down. “In the above photo, the two eagles targeting at the same prey just above the water surface and obviously on a collision course. For easy reference, let us call the eagle on the right R-eagle and the other L-eagle. L-eagle seems more focused on the target; its legs were extended and the claws were already spread out, ready to grab the prey. L-eagle also had its Upper-wing covet feathers and Primary feathers raised up to create drag to help it slow down. L-eagle’s head was slightly above the dark horizon line in this photo. R-eagle’s head is slightly higher than L-eagle. R-eagle also seemed to be hesitating as its eyes were not focused on the target but on L-eagle. R-eagle’s wings were shown to be on a down beat, probably trying to fly higher in a hurry. “In the above photo, L-eagle had gone down even lower, its eyes were still focused on the target but its legs and claws seem to be retracted, probably indicating that it is hesitating about catching the prey to avoid a collision. L-eagle used its wings and broad tail to help it slow down even more. R-eagle seems to be keeping to the same height as the previous photo but its sharp claws were still dangling down. If a collision cannot be avoided; my guess is L-eagle will be hurt as its head is about the same level as the claws of R-eagle. In this photo, the tension of an imminent collision is reaching a climax. “The above photo reminds me of the defining moment of an aerial display which dare-devil stunt pilots seek to achieve in an air show that will leave the crowds screaming in disbelief as the planes were just a short distance away from colliding. But for the two eagles, this similar extreme moment was unrehearsed, as shown by this timely shot taken by Mr Dick Tan. L-eagle had gone down even lower and was ducking its head but R-eagle still flew at the same height as the previous photo but it lifted its sharp claws slightly, just missing the head of L-eagle below it. That was how close this near-miss incident was. “In the above photo, both eagles looked more relaxed, R-eagle lowering its claws again and L-eagle lifting its head slightly. In the above photo, R-eagle was still flying at the same height but seems to have slowed down with the help of its wings and tail, probably trying to catch its breath after a heart-stopping moment. L-eagle seemed to continue with its own flight path, probably musing at the same time about the critical decision it had to make to let the prey go to avoid a disastrous outcome.

“It would be interesting to know whether the eagles had time to communicate with each other in this incident but that has to be a mystery for now.” 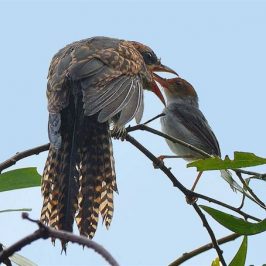 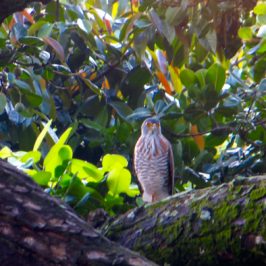 On the afternoon of 16th January 2016, Andrew Tay was at the Singapore Botanical Gardens’...