“There is a well-established feral population of Crested Mynas (Acridotheres cristatellus) on the island of Penang that dates possibly back to the 1950s or even 1920s (See Wells 2007). At the venue of my workshop I spotted more than 10 mynas with 2 different pairs nesting LINK. It was the commonest myna I saw around the residential areas while driving to the venue. The sub-species is presumed to be A. c. brevipennis. I tried some flight images but most were inadequate. Above is a limited image showing the white-wing patch.

The Crested Mynas were very vocal but I had limited time and opportunity for recordings (too much background noise). One recording is given above, with sonogram and waveform shown below. Wells (2007) describes this as a ‘song’. It is a series of discrete notes that sound like “sheeik” (Wells 2007), in this recording repeated 8 times. 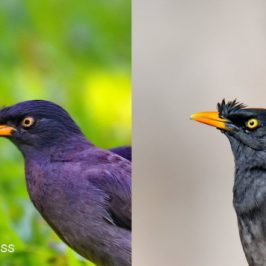