NOTE: This post appeared as a RESPONSE to yesterday’s post, entitled Hybrid Jungle Myna Acridotheres fuscus torquatus – 1. Remarks. I should have clearly stated that another post will appear the next day to give the views of two bird watching colleagues of the author but I failed to do so. Regardless of the contents being posted in the response section, I am going ahead to post this earlier prepared document. Moderator: YC Wee.

“I would like to thank those that responded to the post on the unusual Jungle Myna – posted yesterday [i.e. 25th July 2017] as ‘Hybrid Jungle Myna Acridotheres fuscus torquatus –Remarks’ LINK.

“Two bird watching colleagues from the region responded to say they have seen similar birds and agreed it is not a hybrid.

“Hein van Grouw, an expert on colour aberrations and leucism in birds, responded (via a kind intermediary) to say ‘An interesting case. Hard to tell whether it is a hybrid or not without measurements etc. I agree that it looks more like an aberrantly coloured individual rather than a hybrid, but I cannot be sure. If it is an aberration, then it is certainly not one of the ‘common ones’ like Brown, Progressive Greying, Ino, Dilution or leucism. In this bird the whole colour pattern is changed. Certain forms of melanism (I call them melanism) do change the colour pattern, so it may be an example of one of these.’

“Dr David Wells was very kind to respond twice and offer a definitive opinion: ‘Not a hybrid. This paling of the underparts (varied extent) is an occasional but not too rare mutation in the Pen. Malaysian population of Jungle Myna, known since the 19the century. In fact, the name ‘torquatus’ is based on one of these variants (from Pahang) that the describer, W.R. Davison, thought at the time was a separate species. Davison’s original aberrant Jungle specimens were collected in Pahang at least 50 years before any other Myna species, House included, invaded the Malay states.’

“I had misread the comments made in Well 2007 on this variant species. “Another image of the bird feeding on Papaya (Carica papaya) is shown above.”

“Update/Note: The juvenile Koel has now amassed >25 mynas in the neighbourhood, 4 of them being Jungle Mynas. Becoming increasing more difficult to spot the koel.” 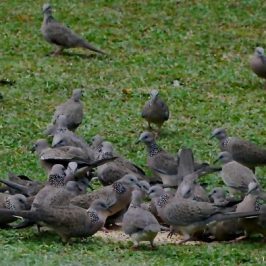 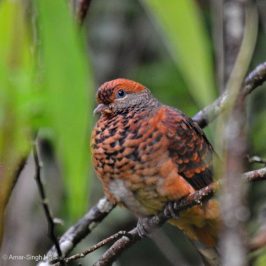