“Dr Henry Yeo Peng Hock, an exemplary Boy Scout in Raffles Institution at the same time when our noted Webmaster was also one, shot this video in Bedok (see images and video below).

“The featured birds are Common Mynas (Acridotheres tristis) but there are two uncommon features in this scene.

“The first is that the squabble lasted an unusually long time. The second is that it involves four birds.

“Mynas generally move in pairs or very small family groups of parents and one or two recently-fledged youngsters.

“Yes, they do form larger flocks. And here is where the terminology of ornithology lags behind that of ichthyology. The fishy fellows distinguish between schooling fish and shoaling fish. Groups of schooling fish have some order (though this may vary in degree). Shoaling fish sort of tolerate each other and hang around together for common purposes, such as shelter, abundance of food, etc.

“Parrots, crows, geese and related avian species would be like schooling fish. There is usually a flock leader, and members of the flock do communicate with each other and synchronise their movements.

“I would consider Mynas to be shoaling. When lots of them get together, they are merely tolerating the presence of the others for some common purpose.

“Perhaps someone can enlighten us as to whether or not there are correct ornithological terms to describe these two types of gatherings.

“Back to the birds in the video, though both the frequently seen local Myna species squabble quite a lot, it is really rare to see disputes last so long. And if there are disputes over territory or food, they usually involved just two birds. Though Mynas tend to travel in pairs, when two pairs squabble over something, only one bird from each side is often involved in the actual pugilistic, while the companions usually just stand on the sidelines and hurl insults.

“The companion normally does not join in until its other half is clearly winning, in which case in may assist in the pursuit as the other pair flee.

“This video shows four birds fighting. Are they two pairs? Or are the four contestants the dominant birds from four separate pairs, who just happened to end up in the same arena, and who have their other halves watching on the sidelines?

“And though these birds are known as Common Mynas, distinguished by the bare yellow skin behind their eyes, they have, in recent years, become rather uncommon, being displaced by foreign talent. The Mynas most frequently seen in Singapore today are the Javan Mynas (Acridotheres javanicus) which were imported in large numbers as pets, and which have become more well established than the indigenous species. The Javan Myna is dark and glossy black, without yellow behind the eye, while the Common Myna is not so shiny, charcoal grey or brownish.

“Though both species do not speak at all well, unlike the celebrated Common Hill-myna (Gracula religiosa), the Javan is a better mimic than the Common, and can master a good repertoire of whistles and sounds. It is also less prone to moult in an unsightly manner. Common Mynas may lose all the feathers on their heads at certain seasons.

“And though there are no scientific studies to prove this, anecdotally, it is reported that Javan Mynas are more brazen and less fearful of human beings and become better pets. Therefore, they do better scavenging in Singapore’s urban environment. Even totally wild birds will not panic when people get quite close. If you see a pair in your garden frequently, they can eventually be persuaded to take food from the hand (above), something that I have not succeeded in doing with wild Common Mynas.” 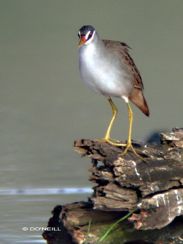 “Communication comes in many forms. Be they in signage, codes, vocal, telegraphic, text or body...