“On the afternoon of 5th September 2015 I was at Singapore’s Chinese Garden where I encountered two unusual but attractive black birds. I failed to identify these birds at that moment but managed to photograph them. “The birds perched on a steel fence about 3-4 m apart. One, on my left was facing left (PS1: above-left) and the other on my right was facing me (PS2: above-right).

“I wanted to take a picture of both together but could not. They were too far apart. I was about 5m-6m in front of the two.

“So I decided to take one at a time. It was a difficult decision to make as I was very excited. I had to decide which one to take first, before both fly away in the next few seconds.

“I quickly took a picture of PS1 first, it then flew away.

“I followed by quickly taking video of PS2. Very pleased to have captured PS2, preening and tweeting very softly. Its a one and a half minutes video. There were sounds of other birds singing and some people around talking loudly.

“The video clips are shown below:

“I think the two are a pair, PS1 male and PS2 female Pacific (House) Swallow (Hirundo tahitica abbot). Can someone please confirm? Apologies – the videos were not captured in a landscape mode.” 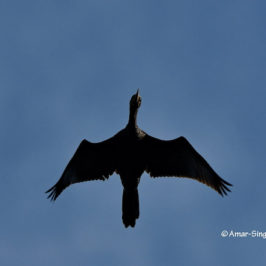