“Once again the Yellow Flame tree (Peltophorum pterocarpum), one of five in my condo, is in full bloom. It is almost 30 years old and has grown to a majestic height of 25m. They shed their leaves every four months or so, though the timing is not synchronised.

“Many different species of birds, including small birds such as sunbirds, visit the tree. But I rarely spend time watching them as it involves straining the neck and lower back. With the full bloom, I decided to see if I could catch some actions.

“Soon, I noticed movements among the leaves and flowers. Zooming in with my camera, I saw a bird with green coloured underpart taking the flowers. After a short interval, it left revealing a red-coloured rump.

“On review through the computer monitor, it appeared that the bird was a female Blue-crowned Hanging-parrot (Loriculus galgulus). The movements of the bird suggested it was either taking certain parts of the flowers or taking the nectar. I am more inclined to think it is the latter as not all the flowers touched by the bird dropped. 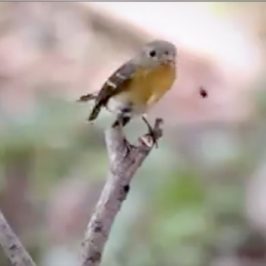 “I was watching a nesting pair of Olive-backed Sunbirds (Cinnyris jugularis) in the city when...