“On 8th January 2013, a small flock of Pied Shags (Phalacrocorax varius, Maori name: Karuhiruhi) had gathered along the shore of a freshwater inlet near the coast of Kaikoura, South Island, New Zealand (above). “A number of them were taking turns to have their bath in the clean, cool waters. As they cruised calmly on the water’s surface, they would immerse their heads underwater and shuffle their wings rapidly, creating multiple splashes (above). “When the shag was content with all the swimming and splashing around, it would adopt a rather upright posture and fling its wings forward forcefully (above), in order to expel excess water, before returning to shore.

“A brief video clip of this bathing behaviour (slow motion) may be previewed above. “Once ashore, the shag adopts its sunbathing posture, with wings well spread out (above). Shortly after, it often preens itself, regularly extracting oil from the preen gland at the base of its tail. As summer temperatures rise at mid-noon, some shags may be observed to begin panting in attempts to keep themselves cool, especially when they are sitting on sun-baked stones!

“A brief video clip of the shags on the shore may be previewed above.” 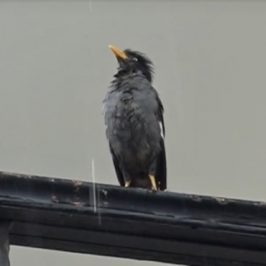 “Reminscent of the Silver-eared Mesia (Mesia argentauris) of Fraser’s Hill, we encountered this colourful species...