“A Common Tailorbird was searching either for prey or spider silk in the Corky-stemmed Passion Flower (Passiflora suberosa) growing wild at the perimeter fence of my condo. While being partially blocked from view, it suddenly gave out a short burst of alert calls when it spotted a man walking past a short distance away. A little while later, it emerged from the camwood (Baphia nitida) behind the fence and began it short chirps. Was it chiding the Black-naped Orioles (Oriolus chinensis) nearby, for disturbing its peace?

“The Yellow-vented Bulbuls are one of the most common birds in Singapore. They have adapted very well to the presence of human in the urban setting. In spite of that they are very shy and will keep far away from human most of the time.

“However, in this instance this bird landed in a Dwarf White Orchid Tree (Bauhinia acuminata) while I was watering my plants. I was alerted to its presence when I heard its calls, probably territorial to show me it was the boss. It was only about 3 meters away and allowed me to take a short clip at almost eye level. 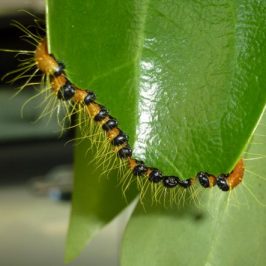