“The White-crested Laughingthrush (Garrulax leucolophus) is an omnivorous bird. It will eat both plant and animal food; and even scraps that are discarded or given by humans. This species must have grown accustomed to people feeding them; at least in the parks in Singapore. This may have resulted in these birds becoming so bold and tame that they approach humans soliciting for food.

“One hot sunny morning, after a long walk in a park, I decided to seek refuge in a shelter. Having brought breakfast, I was munching away when out came a White-crested Laughingthrush. It flew out from the dense undergrowth to perch prominently on a log-like balustrade that was located just outside the shelter. It was merely 3 to 4 metres away from where I was sitting. This bold laughingthrush was completely unafraid of my presence as it stood to face and look at me. What luck! I was looking around for subjects and this laughingthrush just presented itself right in front of me. I was delighted with its sudden appearance though it disrupted my break abruptly. For close to 2 minutes, it stayed on the balustrade, unperturbed and calm. It showed no fear even after the arrival of a few more photographers; all busily clicking. After a brief period of inactivity, it became lively and gave a short performance; prancing around on the artificial log and singing out its unique song.

“By then, it dawned on me that it was interested in my breakfast. I threw a small piece of bread on the ground, which it gleefully picked up before darting into the bushes; preferring to consume it in private. After the photographers left, it returned for second and third helpings. This time, it was even bolder as it came straight into the shelter. At times, it came so close that my camera was unable to focus as it was at less than 1.5 metres, which is the minimum focus distance of the lens. Its partner was also present but was not as bold; staying either on the balustrade or in the undergrowth. It did not solicit food from me or its mate. Later, the pair indulged in some intimate moments; allopreening each other from deep inside the undergrowth.

“Please note that a short segment showing a juvenile’s begging behaviour has been included in the video. The juvenile was not with this pair. It was with another flock, which was foraging by the sides of a road. Some of the birds in this flock seemed to be soliciting food from passing park visitors. The birds were following close to the visitors and looking at them; perhaps expecting some food scraps. They only returned to foraging after getting stares instead of food from the surprised and unsuspecting visitors.” 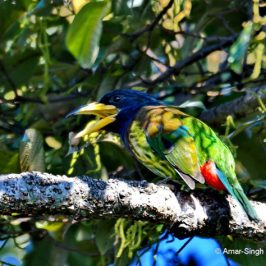