“My recent trip to North Vietnam includes an overnight boat trip visit to Halong Bay. While on the mainland, many Black Kites (Milvus migrans) were observed soaring around the beach and out at the mudflats during low tide.

“Black Kites are medium-sized birds of prey in the family Accipitridae, 50 to 60 cm, and are highly successful as a specie ranging from Eurasia over to China, India, S E Asia, and closer to home, at Sungei Balang, Johor, where many Black Kites can be seen over the padi fields hunting for rats and little snakes. Although it is so common, I have yet to spot any in Singapore, I think we need to keep a look out for it as it is considered an uncommon winter visitor. Any feedback welcome…” KC Tsang, 28th April, 2009.

According to Cheung Ho Fai, this is “the commonest raptor in Hong Kong. Usually seen circling above the urban areas. A group of several hundred can be found at dusk or dawn around Magazine Gap Road in Mid-Levels on Hong Kong Island.” However, Richard Hale counters, “It is many years since those sort of numbers were seen in HK . I think the maximum nowadays would be forty or fifty.”

And wikipedia states, “”Black Kites will take small live prey as well as fish, household refuse and carrion. They are attracted to fires and smoke where they seek escaping insect prey. They are well adapted to living in cities and are found even in densely populated areas. Large numbers may be seen soaring in thermals over cities. In some places they will readily swoop to take food held by humans, offered or not, and their habit of swooping to pick up dead rodents from roads often leads to them being hit by vehicles. They are also a major nuisance at some airports where they are considered important birdstrike hazards.”

Image by KC Tsang, taken in Halong Bay, on the cruise boat, after it had successfully caught the catfish that was swimming too close to the surface of the water. Well, that is something for dinner just before going to bed.

Have you ever seen a White-bellied Fish-eagle (Haliaeetus leucogaster) fishing a rat off the sea?... 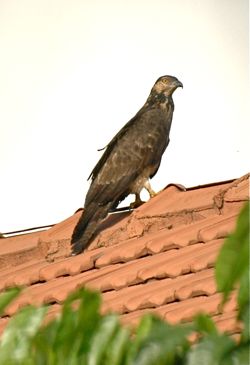 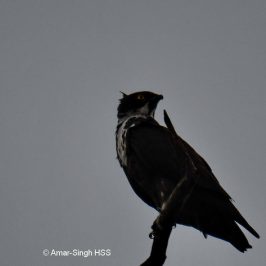