“These dancing shots of the female Black-naped Monarch were taken last Sunday. A pair of them happened to be nearby, while we were waiting for the Oriental Dwarf Kingfisher (Cyex erithacus) to appear.

“…all of a sudden, I noted the female doing some funny actions. Without hesitation, I fired a series of shots, not knowing if they would turn out at all. On inspection after, I realised that the female was doing some kind of ‘dance’. It was either agitated with our bird call, or it was responding to attract ‘the other bird’ in our MP3.

“Well, I leave it to the expert to explain.” There was a male, “probably a juvenile, watching nearby. …I thought the male would be the one to dance to attract the female!”

The Black-naped Monarch regularly hovers in front of leaves to disturb insects, moving actively through foliage and branches. It is active on the move, with wings held drooped and tail partly fanned and cocked. In fact tail-fanning is common in many general of the family, performed when excited. 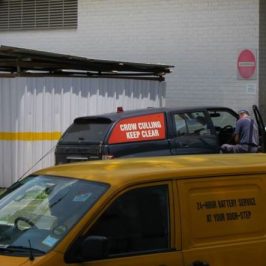 On 17th August 2013 Jeremiah Loei was at the Ang Mo Kio Hawker Centre having...