Australia has to be the only continent in the world that holds the most number of bird species with white and black plumages. Ranging from pelagic birds, shorebirds, land birds from ponds to tablelands and forests, they continue to amaze birders from all over for their sheer variable flycatcher to ostrich sizes.

The first time I heard of the butcherbird was way back in the early 80’s over afternoon tea chat with an Australian colleague at work. I don’t remember how we got into conversation about birds, but I was not convinced of its existence, let alone the officer’s story about how the bird got its name, by the sheer pleading calls made to the town butcher to spare its life!

Well, giving the benefit of adult to an officer with Gold Wings and several bar stripes on her shoulder flap to denote her rank in the Air Force; me a Canberra A.C.T. paid civilian, needed no salutation to a crowned hat before leaving to resume ear de-waxing duties and carrying a broad ear to ear ‘don’t believe ya’ grin.

With an ear syringe, I systematically proceeded to ‘wash the brains’ out of my colleague’s fighter jet pilots. My job was to ensure no clog eared and partially deaf pilots took on iron birds that spit fire in the air with supersonic speed.

Mmmm… Butcherbird indeed! I might have sent a few ill fated F15 pilots to a premature decommission for busted ear drums…..

A quarter century later, how would I to know that I would be in Oz dwelling in birds with real wings in search of the truth that finally emerged from the horse’s mouth of an Australian birder, explaining why the butcherbird got its name.

Life is a mystery and springs many surprises. It comes back one full circle. I simply love it!

Been to a butcher shop or market lately?

Notice how the butcher hangs up meat on hanging hooks and putting then aside until the next customer comes along? That’s exactly what a butcherbird does with its catch… It inherits a reputation for piking cache of food on tree branches, only to return later to eat them.

This incident was observed at Wallace Park, Noosa while taking a break and browsing through a new book acquisition – Stephanie Haslam’s, Noosa’s Native Plants’ where I saw a muffin paper cup flagging from a skeletal tree branch.

“What is that thing doing up there and how did it get there? Wind so strong here at Noosa?”

Just then, I noticed a Pied Butcherbird (Craticus nigrogularis) flew away from the muffin paper cup to another tree that it clicked later that I have missed out that critical part of an observation – to see the cacher at work and why I did not take an image of that paper cup? Have I arrived at a stage where my eyes stayed focus on feathered birds only? Let’s take a look at the classical beak of a butcherbird. It is thick, silvery grey and tapering to a black tip, ending with a prominent hook that distinguishes it from other scavenging white and black birds it associates with (below left).

Butcherbirds are a sub family of cracticids. Being omnivorous and partial scavengers they feed on reptiles, invertebrates, mammals, small birds, fruits and seeds. There are five species of butcherbirds in the Australian continent. While images show butcherbirds to appear looking demure and with some finesse, underneath that hook and an opportunity shot of a Grey Butcherbird’s nest in the making, tells me more than what the white and black minstrel’s plumage simply meets the eye (above right).

Perhaps… their interesting and latent behaviours need another closer look for more scientific documentation of these species when opportunity to revisit Australia knocks again.

This Comb-crested Jacana (Irediparra gallinacea), also known as Jesus bird and Christbird, was photographed in... 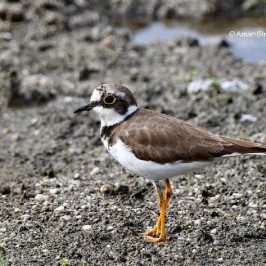 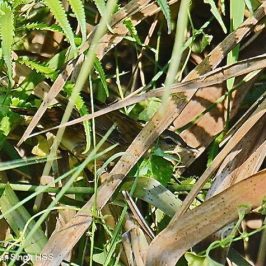