“The Plain-pouched Hornbill (Aceros subruficollis) is considered a South-East Asian endemic by Robson (2000) with a distribution that includes Myanmar, Tenasserim, W & S Thailand and northern Peninsula Malaysia but Wells (1999), who calls this species the Tenasserim Hornbill, includes Assam in the species’s range.

“Previously, only 9 species of hornbills were confirmed for Peninsula Malaysia. Then in 1992, Sutari Supari and Ho Hua Chew observed large numbers of hornbills flying over the Kennering Lake in the Upper Perak valley (Ho & Supari, 1994). They identified the hornbills as Plain-pouched but doubt was widely expressed due to the lack of sufficiently knowledge of this species and the shock of the sheer numbers that had been overlooked for so long, as seen in Wells (1999).

“The species was eventually confirmed through photographs and subsequent observation. In 1993, during the Malaysian Nature Society’s Belum Scientific Expedition, large numbers of hornbills were seen flying over in the late evening and counts made in November that year revealed 2,421 on one evening and 2,365 the next. These are among the largest congregations of hornbills anywhere in the world!

“What has proven to be even more amazing is that the majority of those birds are now believed to be Plain-pouched Hornbills! These large numbers apparently occur in the Upper Perak, around Belum / Temengor, between August – November, during the fruiting season for Petai, Jerai and various Ficus species. The birds have been observed feeding on these fruits. Where do these large flocks go to during the rest of the year? Do these hornbills make some sort of movement between Thailand and Malaysia? There is, as yet, no evidence to suggest that the Plain-pouched Hornbill is a breeding resident in Malaysia.

“Why has it taken so long for this large congregation of hornbills to be discovered? Between the 1960s – 1989, the Upper Perak area was considered a restricted area due to the presence of communist rebels hiding in the jungles. When they eventually surrendered, researchers, scientists and nature lovers slowly started exploring this zone and found good numbers of large animals, including elephants, tigers and the Malayan Sun Bear. They also found a tremendous biodiversity within the large tracts of rainforest still standing. The large numbers of hornbills greatly added to the importance of the area which now boasts the claim of being the only Malaysian area that supports all 10 species of hornbills. Through the efforts of MNS and WWF, the Belum part of the area was subsequently protected as a State Park. This extends to the Thai border where, on the Thai side, the Hala-Bala Reserve is found.

“On the negative side, the surrender of the communists rebels in 1989 saw the Perak state government issue as many as 100 logging licenses the very next year! Adjacent to the Royal Belum State Park are the Temengor Forest Reserve and the Gerik Forest Reserve, both logged for their timber. As animals like elephants and hornbills know no boundaries, their habitat shrinks each and every day.

“After missing out on the MNS Belum Expedition in 1993, it took me 15 years to finally have the opportunity of visiting the area recently. Despite the very short duration of my visit, I had the opportunity to view the hornbill flocks on October 5th evening, along with a few friends. Travelling by boat, we arrived at the area where the hornbills fly over toward their roost at 6.35pm. We were late as the flight of hornbills are usually between 4.30pm – 6.30pm……we had cramped too many things for that day. Nevertheless, just as we arrived, we saw flocks of hornbills flying south. I managed some shots and through observation, those that I could see well were all Plain-pouched Hornbills! Features that were most clear to me were that they were smaller sized than the similar Wreathed Hornbill, had a brownish base to the bill and lacked the black line on the gular pouch. I estimated that those last flocks totaled about 200 birds.

“Although we had seen a flock of 6 Plain-pouched Hornbills well that very morning, the spectacular evening flocks were truly impressive. It is truly heart-warming to know that such avian spectacles still happen in our part of the world! “ 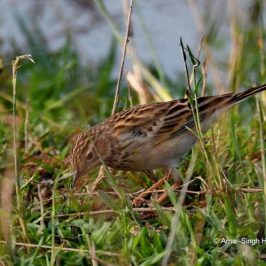 “I usually watch every pipit I meet as I enjoy the birds, but am also...