Allan Teo was with his fellow photographers in Changi on 3rd February 2007 when suddenly a juvenile White-bellied Sea Eagle (Haliaeetus leucogaster) appeared in the sky chasing a Grey Heron (Ardea cinerea) (above). Taken totally by surprise, yet he was ready with his equipment to record a few dramatic shots of this exciting aerial chase.

Although the eagle is a superior hunting machine, the graceful but cumbersome heron succeeded in out-maneuvering the raptor by zigzagging in the air to eventually dived into a patch of low growth and thus escaped the latter’s talons.

In Allan’s very own words: “The heron swept back its outer wing panels to reduce drag and increased airspeed (below). It allowed the White-bellied Sea Eagle to come in closer. Whenever the eagle extended its claws towards it, the heron always twisted and turned in the air, out flanking the eagle.

“The chase ended when the heron let the eagle come in close once again before it suddenly levelled out and dived into the bushes.”

The heron’s sudden crash among the vegetation disturbed the House Crows (Corvus splendens) that were foraging around the shrubs. These crows instinctively flew up and chased the eagle away. A lone Black-shouldered Kite (Elanus caeruleus) that was around, normally an enemy, allied itself with the crows and joined in the chase. 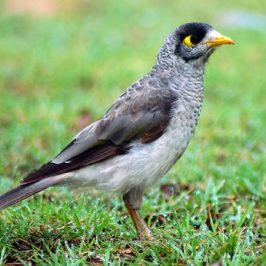