Our bird specialist R. Subaraj sent in this item after reading an earlier posting on Sentosa’s Buffy Fish Owl (above).

“Actually, while the Buffy Fish Owl (Ketupa ketupu) encounters are the first records for Sentosa and the Southern Islands, all the other four local resident owl species have been recorded for this island (below).

“Two species reside on Sentosa, with the Collared Scops Owl (Otus bakkamoena) being fairly common. The other resident, the Spotted Wood Owl (Strix seloputo), is rare with only one pair confirmed on the island.

“There are a couple of fairly recent records of the Barn Owl (Tyto alba) and it may still be resident. I have been told verbally that the species used to be commoner on Sentosa but most perished due to rat poisoning.

“The final species is the Brown Hawk Owl (Ninox scutulata). The resident sub-species, N.s.scutulata, is confined to and around the central nature reserves (Bukit Timah and Central Catchment) and Pulau Tekong Besar. Records from elsewhere in Singapore, including Sentosa, are of migrants from the north, probably of the subspecies N.s.japonica.

Ilsa Sharp from Perth, Western Australia, adds: “I can confirm, as I’m sure Yeow Chin can too, that there were Barn Owls on Sentosa and that they died because of poisoning of the rats they ate – I remember well how we all #@*& the authorities for putting down the poison when they had been made well aware of the owls’ presence at the time! Must have been about early or mid-80s, do you think, Yeow Chin?”

Check out Owls in Singapore for a full list of species.

Input by R. Subaraj and Ilsa Sharp, image of owl by Chan Yoke Meng and of Sentosa by YC. 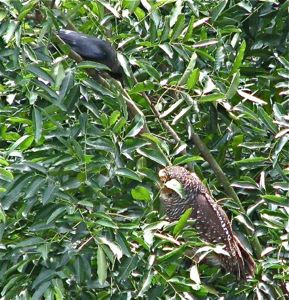 The loud cawing of crows outside her apartment window alerted Gloria Seow to an exciting... 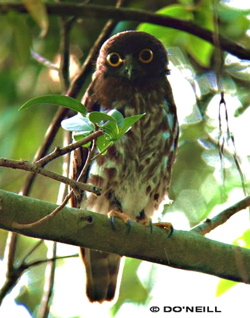 James Heng brought back this account from his birding trip to Bach Ma National Park,...