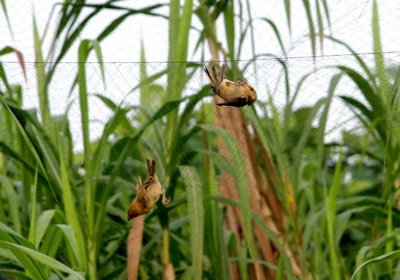 On 2nd Sep 2006 Tang Hung Bun wrote: “This morning my friends and I were shocked to see a poachers’ net (18m by 3m) in the Kranji ar%a. There were five Baya Weavers (Ploceus philippinus) caught in it. My friends quickly freed the birds, but two of them were already dead. These two were probably trapped in the net for a long time and suffered a slow death. They were juveniles. Before we left, we destroyed the net.” 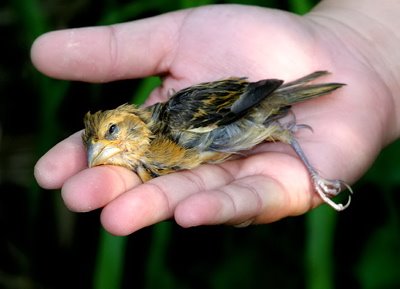 Ashley Ng added: “These poachers usually set up their mist net early in the morning before sunrise or the day before. They will come back the next few hours or days to check on the netting… Why leave the birds to die? Poachers usually have a list of species they want to catch. Those unwanted species are usually left to die a slow death.

“Which species to catch? Based on habitat, they are probable interested in munias, doves, bulbuls which have better market rates than baya weavers.

“Occasionally, other bigger mammals such as bats and squirrels get trapped on the mist net and eventually die.” 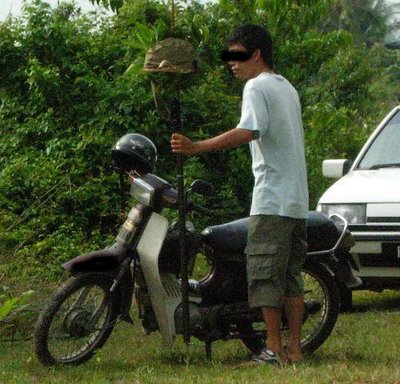 From Penang, Malaysia, Daisy O’Neill has this to say: “…mist netting is the most common method used on the ‘mainland’ across the causeway, especially in more remote areas. I came across another bird trapper doing it in ‘motorbike style’ (above).

“He has a Zebra Dove (now Peaceful Dove, Geopelia striata) in his homemade, creative contraption he is holding. He selects his poled position and waits behind some bushes. At times, he coaxes the dove to ‘coo’ for mates to join her. Doves would land on the old fishing net hung loose in the ‘racket’ loop to catch the landing dove, trapping it when its feet get entangled in the net (below). So simple! 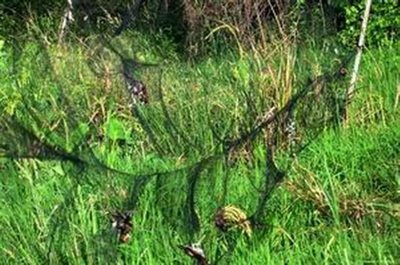 “He was given a friendly advice to be wary of species of birds that are protected, that can land him with a jail term and fine.”

An earlier posting on the poaching of the Straw-headed Bulbul (Pycnonotus zeylanicus) can be seen here.

“Tied up inside a tiny cage, this Asian palm civet (Paradoxurus hermaphroditus) will spend the... 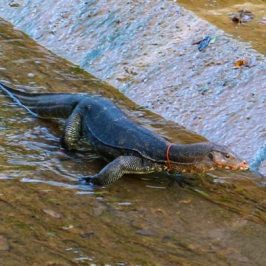