A male Changeable Lizard (Calotes versicolor) was quietly stalking insects among the flowering stalks of the MacArthur Palm (Ptychosperma macarthurii). It remained there for more than four hours before scrambling away.

There were plenty of insects visiting the flowers to feed on the nectar and to collect pollen. These included honey bees (Apis spp.) and stingless bees (Trigone sp.).

During these four hours it caught two honey bees. The bees were then seen to be squashed between its mandibles before they were swallowed. 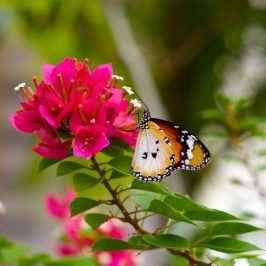