“White-headed Munia (Lonchura maja) plumage changes as they mature requires more observation. Wells (2007) offers some guidance but there is much variation. The birds are very sociable and soon after fledging will congregate in ‘mixed’ flocks of adults, juveniles and immatures/subadults.

“A mature adult has plumage that looks worn and possibly a patriarch or matriarch in the flock (top). A young (pristine) adult looks like the image above.

“The image above shows a sub-adult.

“A juvenile (still being fed by adult) is shown above.

“Above shows a ‘mixed’ flocks of adults, juveniles and immatures.

“One feature that is not often noticed is the ‘black belly-patch’ (see Wells 2007) which is best seen in good light and varies in size.

“Note that the head/cap is not uniform white in younger birds and Wells 2007 describes the colour a ‘smoky pinkish grey’ (3rd image from top); this is pinkish-brown in juveniles.

The calls of the juvenile White-headed Munia is given above. These were hard to recorded due to background nose, other bird calls, hence heavily edited. The calls are sharp and discrete, very much like adult calls. Sonogram and waveform are shown below.” 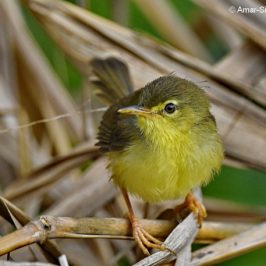