When the Blue-streaked nettle grub (Parasa lepida) is about to pupate, it becomes restless. It moves away from its food plant. This is usual among butterflies and moths where the larvae move in different directions to pupate. This is a strategy to increase survival of the species as pupating together can lead to the entire population being wiped out by predators or parasitoids. Thus grubs under observations need to be kept inside a closed container or isolated by a water barrier. In the case of the latter, a small bottle filled with water is used with the branch where the grubs are feeding inserted through the cap. The bottle is then placed in a basin of water. The water barrier ensures the grubs do not wander off and disappear. The pre-pupating grubs will then wander along the branch, to eventually end up around the container (top). In such a situation the grubs will try to cross the water barrier. If there are floating debris, the grubs will use them to escape (above). A video of the movement can be viewed below. 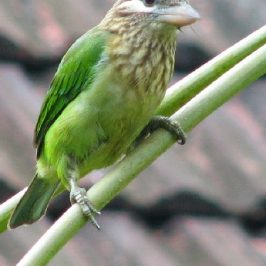