“In early Feb 2016, I observed a pair of Oriental White-Eyes (Zosterops palpebrosus) building a nest on a potted plant at my neighbour’s balcony (below). Both were involved in the nest building and subsequently, two eggs were laid, and the chicks fledged successfully in March. “Photographs of the chicks are attached (below). The nest was built about 2.5 metres from the ground. “Last week, I noticed a pair, presumably the same pair, flying near the plant and searching for the nest. Alas, the nest had been removed and discarded as soon as the chicks fledged.

“Today, I saw that the birds have been busy building a new nest. It’s possible that the Oriental White-Eyes, like the sunbirds, are starting to build their nests in close proximity to humans. And they like to go back to the same place to nest.

“The Olive-backed Sunbirds have been nesting more than 7 times on the same plant on my balcony since 2010.

“I managed to record the white-eye in action this afternoon, 12th May (video above). “By 19th May the nest was more or less completed despite two thunderstorms this week. The birds are just doing final touches as of today (above, video below). 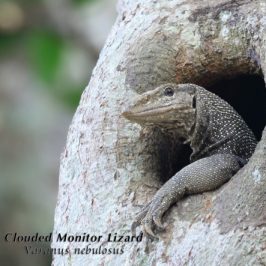 The image below by Sim Chip Chye shows a Clouded Monitor (Varanus nebulosus) that had... 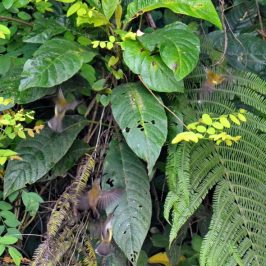