Birds scratch their head when there is a need to respond to an itch, a spot where the bill cannot reach, like the Common Kingfisher (Alcedo atthis) above or the Purple Heron (Ardea purpurea) below. This is also seen in the Wandering Whistling-duck (Dendrocygna arcu) below. In all the three cases above they scratch their head by the direct method by raising their foot from under the wing. Such a method is seen in most terrestrial birds species.

Scratching is also a way to preen the head feathers as well as to dislodge and remove old feathers during moulting.

Then there is the indirect method of scratching, especially among aboreal birds. Here, the leg is extended over the wing to reach the head. However, there are very few images of these around. 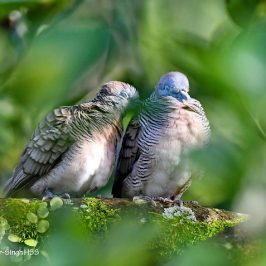