“I was watching this pair of uncommon Violet Sprites (Archibasis viola) shortly after they mated – with the pair remaining together, flying just above the water surface in tandem, with the male still clasping the female by the neck, while she lays eggs underwater by cutting a slit in tender plant stems with her ovipositor, then laying her eggs within the plant tissue. “All fairly normal damselfly behaviour to me, until I noticed that this female’s head was going below the water surface. “At first it looks like this male Violet Sprite was ‘drowning’ his ovipositing mate, but according to some quick online research, it turns out that this is actually common behaviour for certain damselfly species where the female oviposits underwater and sometimes drags the male who is still holding her in tandem (so as to guard against rival males from removing his sperm and inserting their own), down with her… “She can submerge herself for up to 30 minutes at a time, climbing along the stems of aquatic plants and laying eggs at intervals. “I am wondering now whether the female holds her breath, or is somehow still able to breathe, perhaps from tiny air bubbles trapped on her body as she submerges?” 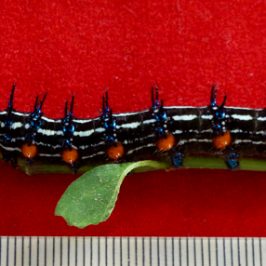