“The White-throated Kingfisher (Halcyon smyrnensis) has a wide variety of food on its menu including fish, insects, lizards, centipedes, and even small birds and snakes. Caterpillars, a favourite food for some birds, appeared not to be sought after by this species. I have yet to see a White-throated Kingfisher taking on a caterpillar… Well, not before this recent encounter. “I was at Satay by the Bay when this White-throated Kingfisher was perched on the opposite bank of the pond (above). It surprised me by diving into the dense vegetation on shore instead of into the pond. “When it reappeared on the same perch, a large caterpillar was found clamped in its bill (above). The kingfisher proceeded to whack the caterpillar several times against the perch (below). Soon, the outer skin at one end of the caterpillar was ruptured. Another forceful swing of the prey caused a string of greenish stomach content to gush out from its punctured body. “The caterpillar was then tossed and about to be swallowed (below). Please note that some of the greenish content was still visible on the caterpillar before it started its entry into the mouth of the kingfisher. “Did the caterpillar actually enter into the kingfisher’s throat? It would appear not. Immediately after ingestion, the kingfisher seemed to be in discomfort. It had its head bowed low and its bill was gaping. Less than 2 seconds later, the greenish content from the caterpillar (arrowed) that had been ingested earlier reappeared (below). “Although not directly captured in the photos, a dark mark left on the perch (arrowed and circled and not seen in the earlier photos) suggested that the perch was wet; likely from the fluid remains of the caterpillar that had been ejected out. “How bizarre! This was my first sighting of a White-throated Kingfisher taking a caterpillar and it was immediately ejected out! This caterpillar must be really unpalatable. After the drama had ended, the kingfisher resumed to its normal self and moved on to another perch to await for its next prey.” 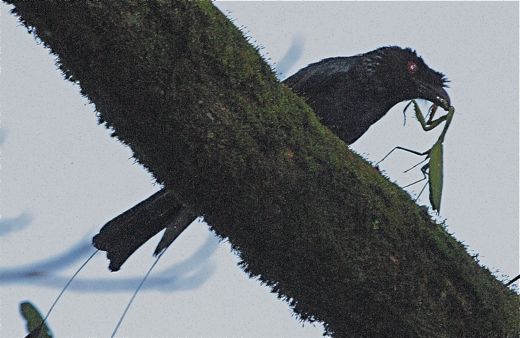 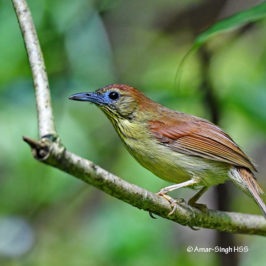