“I had the opportunity to stay at the The Sentosa resort, just opposite the clubhouse of the Sentosa Golf Club over the weekend. “The Indian Peafowl (Pavo cristatus) population on the island has been skyrocketing since the initial population that went feral after the old Coralarium went bust.

“During our stay, my kids fed the peacocks every day. We came across a hen with 3 chicks one of which was an albino.

“My father who is a religious golfer every Sunday at Sentosa says that albino chicks are quite common, but he has not seen an albino adult. Which proves the point which I am about to talk about.

“During our morning encounters with the hen and chicks. I set out to show my kids that all parents are the same, they will do whatever it takes to protect their young. I have often told them about my episode with a very determined chicken (hen) that flew over a tall hedge and attacked me from above in a bid to rescue her chick which was in my hand.

“We often tried to isolate the chicks from the hen only to find the hen coming back and trying her very best to regroup with her young.

“She would move off with the other two chicks in tow. It was up to the albino chick’s own effort to get back to the mother.

“To be absolutely sure of the observation, I repeated it over a few days. Isolating the albino chick first, then the normal coloured chick. And then vice versa.

“In all cases. The mother did not come back for the albino.

“It is clear enough to me that the mother [Indian Peafowl] is prejudiced against the albino chick. The poorer condition of its plumage compared to its siblings shows that it is set on an uphill task to survive from day one. The hen simply tolerates its presence but does not treat it the same as the other two.

“The albino chick is often lagging behind but its will to keep up is very strong (top left).

“The second picture (top right) shows the mother already walking away with the two normal chicks. The albino chick was isolated and cornered for a while and making distress calls. The mother did not come back for it. We let it go on its way before things get out of hand.” 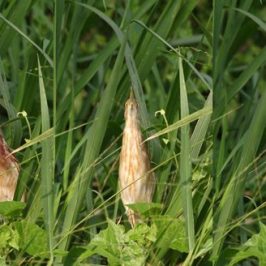 “There was an earlier posting of a Yellow Bittern (Ixobrychus sinensis) in camouflage mode LINK....