“Well, this is not exactly an input with regard to birds’ feeding behaviour, but rather, the bird as the prey or a mere unfortunate incident. “As usual, interesting stuff almost always happen whenever my battery runs low and when I’m ready to pack and go.

“We had been walking for the past 2 hours and were on our way back to the visitors’ centre. As I was hurrying to catch up with CK and fiddling with my battery-depleting camera at the same time, I heard somewhat hasty flapping of wings from above me. Looked up briefly while still walking briskly, I thought to myself, “Hey..there’s a bird up there..but against the light..over-exposure..forget it..let’s not waste the last of my battery life.. BUT, it’s not perched, it’s hanging mid air!” So, I back tracked and found a bird in this situation (above left).

“Shouted to CK for help. He started throwing stones and twigs/branches at the spider web in an attempt to dislodge the bird. At one point, a medium sized branch actually ended up trapped in the web! The tussle (between the bird/CK and the spider web) went on for like ?10min.. Out of a sudden, ‘everything’ came crashing down (between the concrete pavement and the grass patch). CK went over to pick up the bird and tried pulling off those sticky spider web from it’s body and feet. It was an Oriental White-eye (Zosterops palpebrosus). It’s tail was broken and dangling. While it was still in shock, I managed to capture a shot with CK’s camera (above right). When CK manoeuvered it for me to take a shot of the underparts, it flew off rapidly! Not sure how it’s going to balance w/o a tail and wonder if it will survive? “The culprit was also down on the ground. It was a [female] Batik Golden Web Spider (Nephila antipodiana) (above left). [What looked like] baby spiders also seen crawling around the Web Spider on the web [were actually the male spiders (or are they?), who are very much smaller] (above right).

“About 2-3 giant spider webs were spotted as we walked off after the saga. CK almost blundered into one huge web as it was spun so low, right in the center of the walkway!

“Out of curiosity, will the spider eventually feast on the Oriental White-eye if it had not been saved? Are small birds part of giant spiders’ diet as well?” 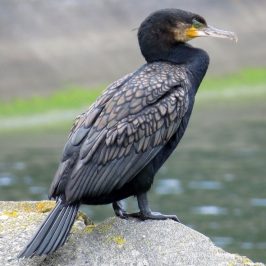 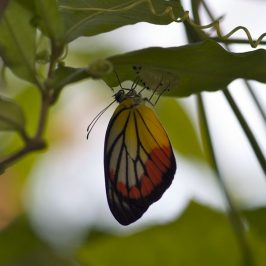