Ong Ei Leen was at Singapore’s Pasir Ris Park on 11th March 2012 (like everyone else), hoping to catch a glimpse of the STAR of Pasir Ris Park, the Mangrove Pitta (Pitta megarhyncha). She sent in this report:

“Lucky for me, there were already photographers standing by at the Mangrove Pitta’s usual appearance site (which I believe to be). They were nice enough to prompt the others when the STAR finally made it’s appearance (I believed they’d waited for ?hours…). But I was more excited at hearing two pittas calling than spotting it. To my disappointment, it was just a recording playback tactic used by one photographer (I felt sad for the pitta…seriously). No doubt, I still had to thank the photographer for… (this hitchhiking opportunity).

“The above video clip shows the Mangrove Pitta calling, while the rest were having a great time snapping away, as the pitta was perched on an unobstructed position at eye level!

“Noticed the pitta was ‘bloated up’ at some point of time. Just wondering if it was taking a deep breath?

“After all the hoo-ha, the photographers packed up and left (it was almost noon). There I was, all alone, watching the pitta’s activity for the next hour. As my battery went flat, there were no further images to offer.

“The pitta must be hungry… When the surroundings finally came to a quiet, it hurriedly hopped it’s way across, beneath the boardwalk, towards the swampy area, to feast on some crabs, worms… It was later observed to be holding a piece of ?nesting material in it’s bill, perched in one position, bobbing it’s head, as if yearning for a companion… for a whole of 30minutes (my neck almost broke!…). After which, it hopped off behind a heap (?nesting site), away from my vision. 15 minutes on, it was out again, hopping onto the boardwalk, crossing over to the other end, oblivious to the fair bit of human traffic and continued foraging on the ground, into the thick vegetation. Another 15 minutes passed… no sign of another of it’s kind thou…”

Note: The background call in the top video was a recording playback by another photographer at the scene. 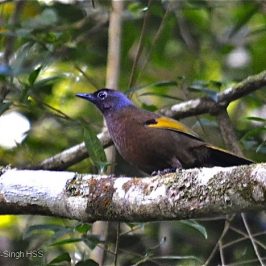 “A friend was kind enough to invite us to visit a reforestation site that the...