“According to Wikipedia, mobbing is an anti-predator behaviour which occurs when individuals of a certain species mob a predator by cooperatively attacking or harassing it. The objective of such attacks is usually to protect their offspring. On 22 May 2010, I encountered a Long-tailed Shrike (Lanius schach) that was mobbed – first by a pair of Pacific Swallows (Hirundo tahitica), and then by a couple of Olive-Backed Sunbirds (Cinnyris jugularis).

“It started when a Long-tailed Shrike flew in to perch on the frond of a coconut tree. It was perched for barely less than a minute before mobbing was started by two Pacific Swallows. The birds took turns swooping down to bomb-dive the shrike to force it into defensive mode. The shrike remained perched, but became wary of the attacks. It watched intensely for the swallows and was agitated whenever the swallows approached. One swallow managed to steal a peck on the back of the shrike; but it endured. The critical moment, was unfortunately, not captured due to the speed of the action. The Pacific Swallows retreated from the scene after attacking for about 40 seconds.

“The shrike had a minute of peace; but was mobbed yet again when an Olive-Backed Sunbird appeared. At first, the sunbird flew away when it saw the shrike. However, it eventually re-appeared with its partner. Together, the sunbirds screamed at and harassed the shrike. Unable to tolerate further, the shrike flew off with the sunbirds in hot pursuit. The aggression shown by the pair of Pacific Swallows and Olive-Backed Sunbirds is typical of protective parents. They must be nesting somewhere nearby. The Long-Tailed Shrike had unknowingly ventured into the breeding birds’ territory.” 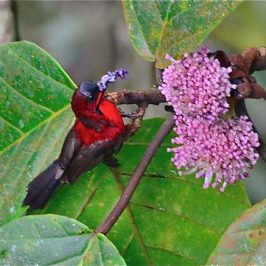