“I was reading with interest Luan Keng’s earlier explanation of a Brahminy Kite (Haliastur indus) in fright moult. I was wondering if the same explanation could be made for the attached ‘raggedy’ brahminy spotted at Tanah Merah Coast Road in January 2010. I didn’t witness any aerial battles but the bird seemed a lot worse for wear. Besides the missing wing feathers, of particular interest are the ‘new’ tail feathers that are coming in. Though the bird was clearly not in full plumage, nevertheless it was gliding as gracefully as any of the other full-feathered brahminies on that hot morning,” wrote Lim Poh Bee on 8th March 2010.

The image was sent to field ornithologist Wang Luan Keng who replied, “Wow, this bird has got some really worn out flight feathers on the wings and tail. Looks like it is growing its innermost primaries (P1-4), with the outermost primaries P5-10 still not replaced. At least 3 of the primaries (p1-3) seemed to have been replaced together, with P4 soon after. This is quite amazing for such a big bird, as losing 3-4 feathers would create a large gap in the wing, which is not aerodynamically efficient. This is not an accidental moult either as both sides of the wings are pretty symmetrical in the moult pattern.

“The tail is also very interesting – I don’t think the tail feathers are coming in. The outer tail feathers looked more like highly worn out but I have never seen anything like this before and can’t comment further. This is really interesting.”

Responded Poh Bee, “Yes, most interesting indeed. While I was observing the bird I kept wondering how it could still be flying and gliding with so many missing and raggedy feathers.” 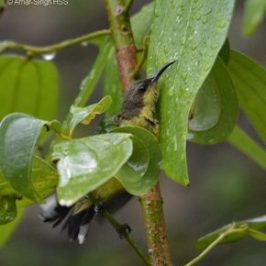 “Sunbirds love to have a cool shower/bath on wet leaves. They wait eagerly for us...