“Was fortunately on leave yesterday. Had just come back at lunch time from a walk in a forest reserve when I received a frantic call from three home-schooled young teenagers (one of the perks of being a paediatrician is a lot of contact with children of all ages). Daniel, Shobhana and Matthew wanted me to come right over to their home as a large “snowy white” owl had landed in their garden. These three kids had recently received a copy of my book on garden birds and are, as their dad says, “budding bird watchers in the making”.

“I rushed over and there was a large owl sitting in their compound adjacent to a wall for shade. Had some difficulty with identification at first but later recognised it was a juvenile and the appearance suggested an eagle owl, then ID was easy. It was a juvenile Barred Eagle Owl (Bubo sumatranus sumatranus).

“The kids and parents were ecstatic to see such a delightful, large creature in their home. We were unsure if it was hurt or a bird escaped from captivity. We let it sleep much of the day and then feed it some chicken strips in the evening which it took with gusto. Although it was adult in size (juvenile plumage) it was not able to feed off a surface and still needed food to be brought to it (we used pieces of chicken impaled on a stick to feed it). After being fed it could fly quite well but stayed near by. The juvenile makes soft chirping sounds for food and a loud ‘clack” when upset.

“We called Sein-Chiong Chiu for help as he has nursed injured raptors as well as a juvenile Barred Eagle Owl previously. We collectively decided that although it could fly it was still not able to hunt and would starve on its own. So Chiu brought his cage and a decision was made to nurse it for another 2-3 weeks until it could feed independently. I must say that I have yet to see as skilful a ‘capture’ of a bird with razor sharp talons as done by Chiu. He has given instructions on feeding and care and the saga continues…

“The children have already named the bird ‘Prince’ although some of us were keen on a Harry Potters’s owl’s name ‘Hedgwick’ – but they have the privilege, having discovered it first.

“Many thanks to Chiu for his time, expert advice and gentle care.” 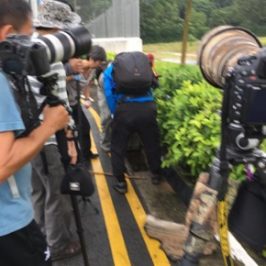 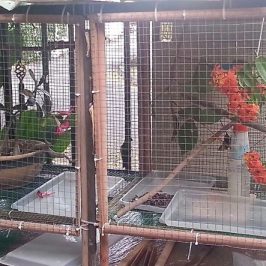 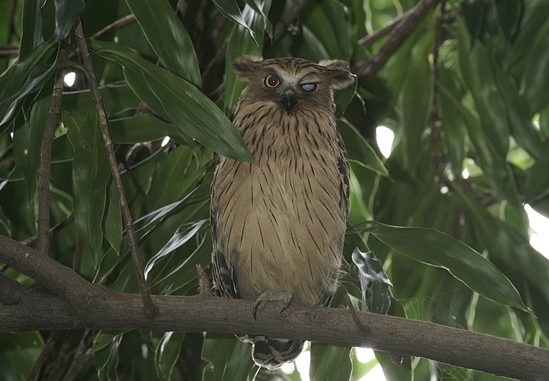