“The Black-naped Terns (Sterna sumatrana) that return to Loyang Rock each year have a habit of following passing large ships en masse. When a vessel approaches, a great number (which also includes other species such as Little Terns, Sterna albifrons) would shadow the stern. They appear to be attracted to the ballast water or the wake stirred up by the ship’s passing. Could it be that the movement of the large ship forces up benthic or other marine organisms to the surface, thus giving the terns, which do not dive very deeply, easy pickings? This phenomenon was first observed by Jacqueline Lau from a nearby marina.” 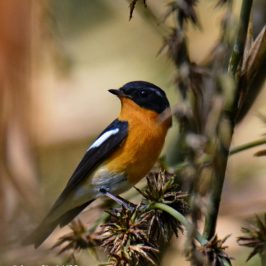