Chong Yih Yeong documented a rare moment of a Brown-throated Sunbird (Anthreptes malacensis) mobbing an adult Blue-tailed Bee-eaters (Merops philippinus) perching on a branch. The sunbird attacked the bee-eater two to three times, each time pecking around the vent area.

According to John Vickerman, “…we know that sunbirds are fiercely territorial and it is well known that in defence of territory, attacks can be made on other species – regardless of size – which may be perceived to be a threat to that species’ ownership of territory. I would hazard a guess that this is what this all about – “get off my patch!”

“John is right, the sunbird is highly territorial. I have a pair coming to my balcony to take bath everyday, they will attack any other bird that goes near,” added Adrian Lim.

Most sunbirds are fiercely territorial and during the breeding period the defence is most intense. Usually, the males defend the territories, singing from vantage points and demonstrating aggressive behaviour towards intruding sunbird species. This may be in the form of shrill calls and various bodily movements or even actively chasing the intruders away.

However, this is the first account, as far as can be established, of a Brown-throated Sunbird with such aggressive behaviour. 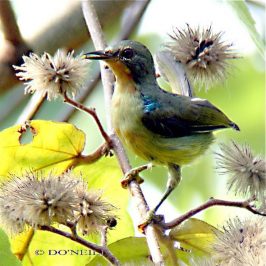