During the last weekend of November 2007 at Peninsular Malaysia’s Fraser’s Hill, Pamela Lim was witness to an exciting phenomenon involving the flocking of “hundreds” of Long-tailed Broadbills (Psarisomus dalhousiae). The video posted in You Tube by Tee Lian Huat mentions about 60 birds in one tree. When queried, Pamela admitted that “the hundreds were my description in excitement as I saw flock upon flock flying up from the depths to one tree. The number 60 plus is just a conservative estimate. They flew to the next tree, and then flew away. The second wave had about 30. We don’t know if it’s the same flock or not.”

The image above shows a few of the flocking birds taking a rest on the leafless branches of a tree.

Long-tailed Broadbill is a distinctive bird with a yellow face, slender green body and long blue tail. It’s high-pitched call usually announces its presence, but whether you can spot it is another matter. It usually hides among the foliage of trees.

Many broadbills are gregarious and are often seen in small flocks. They even join mixed-species flocks when these bird waves pass through their foraging areas. The Long-tailed has been reported to form noisy foraging parties of about 15 birds during non-breeding periods. In the Indian Subcontinent, as many as 40 birds have been reportedly seen together. This observation of a pure Long-tailed Broadbill bird wave of probably more than a hundred birds in Fraser’s Hill may well be a record.

According to Wells (2007): “During at least a part of the year birds also form monospecific bands whose collective movements through foliage, climbing among creepers, etc., are likely to benefit surface-snatchers by the disturbance created.” However, no number is mentioned. 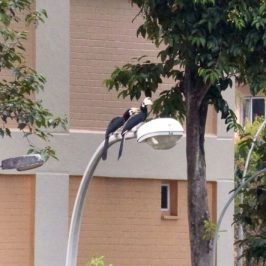 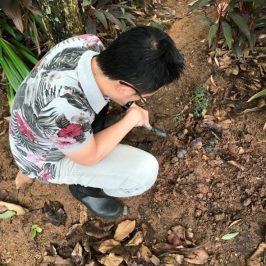 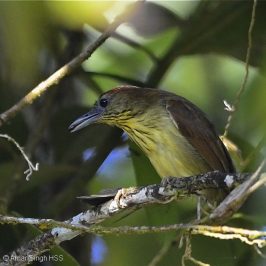