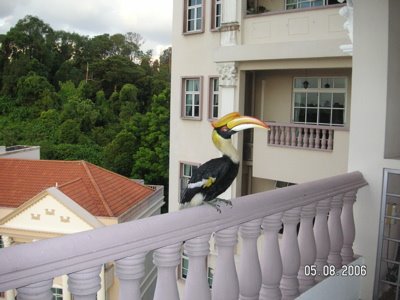 On the evening of 5th August 2006, Matt Quin was pleasantly surprised when a large bird landed on the balcony of his apartment at Bukit Tinggi. He went into the web and found out that it was a Great Hornbill (Buceros bicronis). The bird had a metal ring around its right foot and he presumed rightly that it was an escapee from somewhere.

The hornbill was very comfortable with his presence and stayed for about 15 minutes before it flew off to the balcony of the apartment above his. Matt’s final words: “A truly impressive bird!” 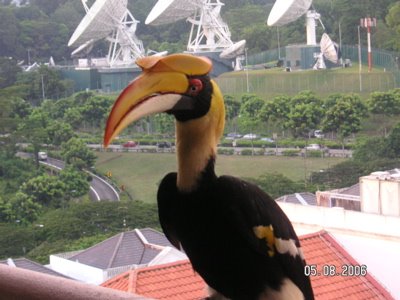 Yes, the Great Hornbill is truly impressive. This appears to be the only one left, probably an escapee from Jurong Bird Park many, many years ago. It is still flying around the Bukit Timah area, surprising Singaporeans who are generally not familiar with these birds with its presence.

In March this year the bird visited Stephen Lau’s apartment, also in the Bukit Timah area. Apparently it roosts at night within the grounds of Brian Ng’s condomonium. An earlier posting gives an account of it pairing with the Rhinoceros Hornbill (B. rhinoceros), another impressive bird, and checking on a cavity in an old tree for a potential nest.