“This scene was played out yesterday afternoon at about 1530 hrs (above). This juvenile White-bellied Sea-eagle (Haliaeetus leucogaster) perched itself on the crown of the mangrove tree, scanning the area for potential prey. It is about 40m from the bridge across Sungei Tempines where the current Grey Heron (Ardea cinerea) heronry is, spanning both banks of the river. “Ten minutes later, the sea-eagle decided to take it’s chance on the nestling just a couple of metres away. The parent Grey Herons were watchful and alert all this while. They screamed and spread their wings (probably to make themselves look bigger) and pointed their long sharp beak at the attacker (above). “Realising it’s futility, the inexperienced juvenile sea-eagle decided to get out of harm’s way. It then approached another nest that was guarded by an adult heron (above, below). The earlier commotion had alerted this bird to potential danger, and it’s scream was even louder. This juvenile sea-eagle probably had to stay hungry a little longer since the whole heron colony was aware of it’s presence. It landed out of sight at a lower branch along the river. “About an hour later, it was observed (from Hut 5) to be cruising low (mid-tree level) along the river looking for potential prey. This is not the usual sea-eagle way of hunting; it will circle at higher altitude and dives down when a prey is spotted.” 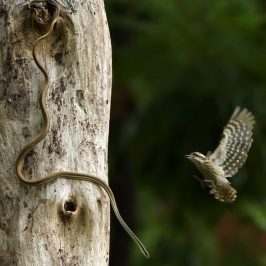