My involvement with a White-eyed Bulbul 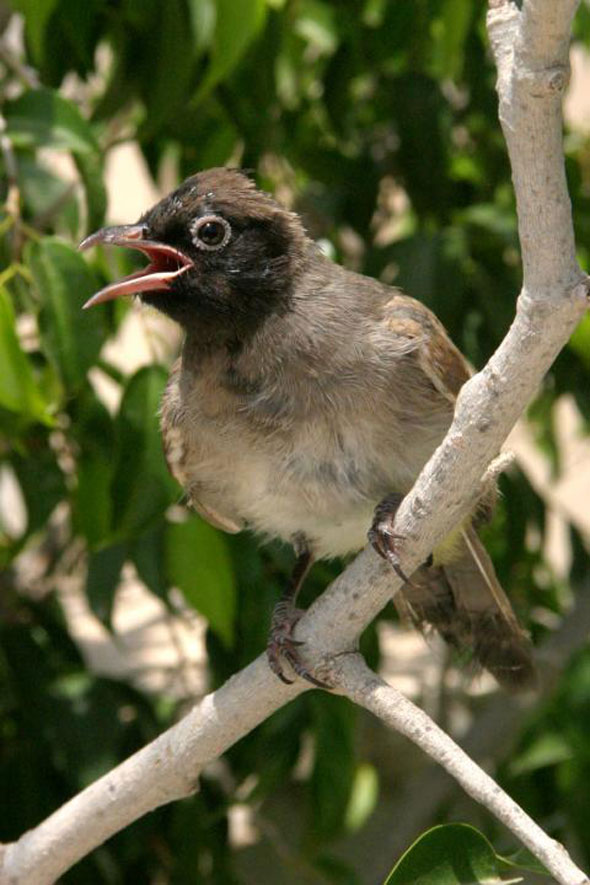 A comment was made HERE on 6th April 2016. Py (or Pia) has since provided images to illustrate her story. “I grew a baby White-eyed Bulbul (Pycnonotus xanthopygos) that I calld NYP. The parents had built a nest on my roof and 2 out of 3 eggs hatched. When the two chicks were ready to fly from the nest the last egg hatched .The parents had enough to see to with the two chicks flying into all kind of dangers and abandoned the last one. I took it and fed it. Mainly flies. The way to catch flies is using a transparent sandwich plastic bag. Turn it upside down and hold it over a resting flie . The flie will fly into the bag. I kill the flie when the chick is very tiny, like one or two days old. But it will only eat it alive when it gets older. But this is the best and natural food for them. If you don’t have any flies. Put out a small piece of meat, after few minutes a big flie will come.

“I did catch all kind of flies for my bulbul chick and it grew from that. I fed it every 5 minutes in the beginning. It decides when it is hungry and when not .I only kill the flies when it is hungry- They can stay alive 4-5 hours in the plastic bag. “I went indoors and outdoors with it so it got used to being outdoors – I wanted it to be wild. I left the windows open so it could fly in and out also. It would come when I called it. “It is good with a short name because it is easier to remember for the bird. It still comes visiting almost every second day. But it is not tame any longer and will only come as close as 1 meter from me.

“A way to keep the chick warm at night is letting it sleep on a plastic water bucket that has lukewarm water in it. I change the bucket at night so it doesn’t get cooled too much down.

“When the chick was very young I carried it in my hand all day long, They have a higher temperature than us. And after eating well, their temperature goes up. You can check if the baby bird gets the right type of food. The stool should come out like in a little transparent bag. If it is too watery or too hard it is a problem.

“I have 3 cats now and the new little bulbul chick a nephew brought me 3 days ago is 4 days old. I let the cats smell it, but not touch it. So they would not be too curious or jealous. It was a problem with my first bulbul chick to teach it to be afraid of cats. But it finally learned it by me shouting like an angry bird each time my cat came close. I also worried that my first bird would land on some stranger and he would hit it or steal it. So I had to scream this warning each time it came close to an unknown person. But it learned well and is a happy bird today I believe.

“It came with a spouse and greeted me with a special sound and waving the wings in a special way. I have never seen another bird does it. I think of my old and new bird as good luck for both of us. It takes much work, 2-3 weeks but after that you will feel very happy that you did it because they are so sweet and affectionate.

“Mine liked to sit on my shoulder under my ear. And it would nibble and pick on my hair. Or try to pull off my gold chain. It would peck at absolutely everything in my home, being extremely curious. At one time it ate a bee that stung it inside the neck. I thought my bird would die.

“NYP got totally purple all over and the neck swelled up then it got very weak and kind of fainted, but 2-3 hours later it got well again. The grown up birds live on bees and get immune to the stings. But first time was scary! They also eat fruits but you should read about which kind to give the bird and check it’s stools after feeding it.

“Good luck to all of you who start with small chicks.”